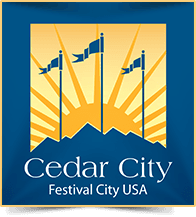 
Cedar City, with a population of 29,000, is the largest community in Iron County and is located at the mouth of Coal Creek in south-central Utah. Its elevation is 5,800 feet above sea level, and it lies in a semi-arid part of the state with 10,000-foot mountains to the east and a vast desert area to the west.

Settlement began on November 11, 1851, with the arrival of a group of 35 men from Parowan, 20 miles northward, to establish an iron works. They were organized and traveled in two militia companies--a foot company and a cavalry company--under the direction of Henry Lunt. The actual settlement site on the north bank of Coal Creek had been selected a week earlier by George A. Smith and a committee consisting of Matthew Carruthers, Henry Lunt, William C. Mitchell, John L. Smith, and Elisha H. Groves.

Small cottonwood log houses were built fort-style at the western base of the hill. The settlement was given the name of Fort Cedar because of the abundance of trees which were called cedar trees, although, in reality, they are junipers.

The boxes from the wagons were removed and used for temporary shelters while small log homes were constructed from the trunks and large limbs of cottonwood trees as well as float material found along the creek bottoms several miles to the west. As the log houses were completed, families were brought from Parowan. In the meantime, the wagon boxes served as a temporary fort. Later, a site for the fort was selected nearer the proposed blast furnace, at the present city park, which was to have been a company town but was not developed.

When Indian difficulties threatened, the location of the fort was questioned as the nearby hill gave the Indians a decided tactical advantage. Also, as more and more ironworkers arrived, the fort became too small. A new and larger site was selected on the south bank of the stream adjoining the old site to the southwest. This was partially occupied in the early months of 1853 by those who wanted to move and by new arrivals. With the outbreak of hostilities with the Indians in July 1853 (the Walker Indian War) a forced evacuation of the entire fort was made in two days to the new site.

The northeast part of the new area, which was a half-mile square, was enclosed within a wall, leaving some of the lots on the west and south outside the wall. It was completed in January 1854. Interstate Highway 15 now bisects this old town site.

Two years later (June 1855), another site, closer to the blast furnace and out of the floodplain of Coal Creek, was surveyed and occupied at the suggestion of Brigham Young. This is the present site of Cedar City.

Beginning with the demise of the iron works, in 1858, the town's economy became agrarian in nature although iron mining continued strongly through World War II and into the 1980s. The coming of the railroad to Cedar City in 1923 exposed Utah's national parks to the world of tourism, and Cedar City was promoted as the "gateway to the parks." The railroad also provided an outlet for the products of the iron mines. Currently, the city's economy is based on tourism, agriculture, some mining activities, some industrial and space-age complexes, and Southern Utah University with an enrollment of 7,000 students. The college was founded in 1897 as a branch of the State Normal School (University of Utah). In 1913 it became a branch of the Utah State Agricultural College of Logan. In 1968 the state legislature transformed it into a four-year college of liberal arts and sciences with elementary and secondary teacher education programs.
On January 1, 1991, it attained university status and its present name.

Southern Utah University is the home of the Utah Shakespearean Festival, which provides a significant economic and cultural infusion to the area. The professional quality of the plays produced each summer, employing talented professionals from all over the United States, is becoming known around the world. The Festival won the 2000 Tony Award for outstanding regional theatre.